In the last 30 years, the Edgecombe Community College Foundation’s Annual Golf Tournament has generated a whopping $400,000 for student scholarships.

On September 17, the event celebrated its 30th year by raising about $21,000 and bringing back the winning team from the 1985 tournament: Curtis Edmondson, Junior Edmondson, Charlie Harrell, and Carl Thurber.

Curtis Edmondson has played in all 30 tournaments. “We won the first one, then it took us another 20 years to win again,” he says, adding that his team has won four or five times over the years, including this year.

Edmonson says he plays in the tournament every year to honor his family and support the college. His father-in-law, Jack Havens, was the first chair of the ECC Board of Trustees. The Havens Building on the Tarboro campus is named in his honor.

A member of the ECC Foundation Board of Directors, Edmondson is committed to the college and its efforts to raise scholarship funds for “students who want to get an education but need a little help.”

The 1985 Winning Team members hit the ceremonial tee ball and were recognized several times throughout the day, most notably by a special banner on their golf cart. 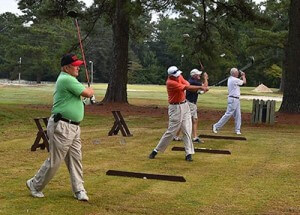 The winning team from the first annual ECC Foundation Golf Tournament in 1985 returned to play again and hit the ceremonial tee ball. From left are 1985 Winning Team members Junior Edmondson, Curtis Edmondson, Charlie Harrell, and Carl Thurber. This group placed fifth in the recent golf tournament, proving that golf is a lifetime sport.

The tournament was held at Maccripine Country Club. Thirty-six teams played in the tournament, which is the largest fundraiser for the college.

“It’s a great day for us, but our students are the real winners,” says Karen Andrus, executive director of the ECC Foundation.

“We are very grateful for the support of our sponsors, our volunteers, and especially our golfers. Year after year, they come out to be a part of our special tournament. It’s truly a wonderful day.”