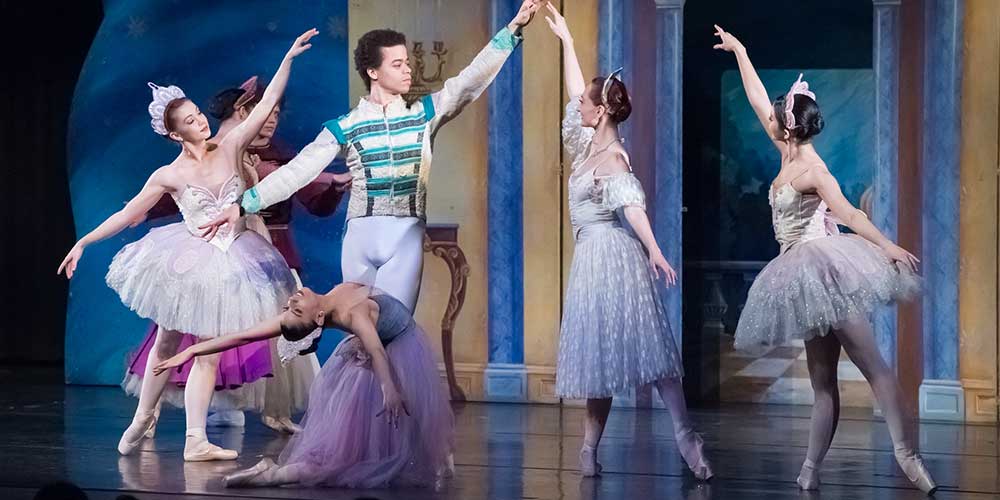 In its first return to Tarboro since 2019, New York Theatre Ballet (NYTB) will perform signature works by master choreographers on Thursday, October 6, at Edgecombe Community College.

This year marks the ninth year that NYTB has performed in ECC’s Edgecombe Performance Series. This event marks the first performance in the 2022-2023 series.

The October 6 performance begins at 7 p.m. in Keihin Auditorium in the Fleming Building on the Tarboro campus. The event is free, but tickets are required.

Under the artistic direction of Steven Melendez, NYTB will perform the works of Agnes de Mille, Antony Tudor, Martha Clarke, and James Whiteside. As part of a new initiative, NYTB will offer Between the Acts, a community engagement program, during intermissions.

In addition, the company’s acclaimed Once Upon a Ballet series will present The Alice-in-Wonderland Follies at 10:30 a.m. on Friday, October 7, for Edgecombe elementary school students.

“New York Theatre Ballet has been making our annual trip to Tarboro, North Carolina, into the Edgecombe Community College theater for nearly a decade,” says NYTB Artistic Director Steven Melendez. “Returning this year feels like going home. I am especially excited to return there in my new role as artistic director and am looking forward to sharing the transformative power of dance.”

On October 6, NYTB’s Legends & Visionaries introduces audiences to a range of choreographic styles beginning with a suite of dances created by Agnes de Mille for the 1945 Broadway classic Carousel. Credited with transforming Broadway musicals in the 1940s and ’50s by blending both classical and modern dance, de Mille brought her signature style and use of gesture to this legendary Rodgers and Hammerstein musical.

Staged for NYTB by Gemze de Lappe with costumes by Sylvia Taalsohn Nolan, Carousel is a “don’t miss” event. The suite of dances from Carousel entered the repertory of NYTB in 2007.

Dark Elegies, considered Tudor’s finest work, expresses the raw emotion of a tight-knit community faced with the inexplicable loss of their beloved children. The ballet was given its world premiere in 1937 by Ballet Rambert in London and entered NYTB’s repertory in 2013. Dark Elegies is staged for NYTB by Amanda McKerrow and John Gardner.

NYTB’s Legends & Visionaries program will round out with two contemporary works, The Garden of Villandry, choreographed by Robert Barnett, Felix Blaska, and Martha Clarke, and Mamborama by James Whiteside, principal dancer with American Ballet Theatre.

The Garden of Villandry, a Victorian pas de trois, is set to Franz Schubert’s Piano Trio No. 1 in B flat, with costumes by Jane Greenwood. The ballet will be staged for NYTB by Clarke.

Whiteside’s joyful Mamborama, premiered by NYTB last spring, is set to Tito Puente’s Mambo Gallego and features costume design by Eric Winterling. Speaking of his inspiration for Mamborama, Whiteside says, “Tito Puente’s music sparks so much joy and nostalgia in me. I’ve wanted to make dances to it since I was a teenager.”

New York Theatre Ballet’s Once Upon a Ballet series presents The Alice-in-Wonderland Follies on Friday, October 7, at 10:30 a.m., for Edgecombe elementary school students. Follow Alice’s adventures through Wonderland as she meets some of the most beloved characters in children’s literature. Presented in a vaudeville setting, this eclectic one-hour ballet draws on many different dance forms – from Irish step dancing to African dance and classical ballet – all of which combine to make a highly entertaining show.

The NYTB performance at ECC on October 6 is free, but reserved seating tickets are required.

Tickets are available through the ECC Box Office on the Tarboro campus, by contacting tickets@edgecombe.edu, or online at etix.com, keyword: Edgecombe.