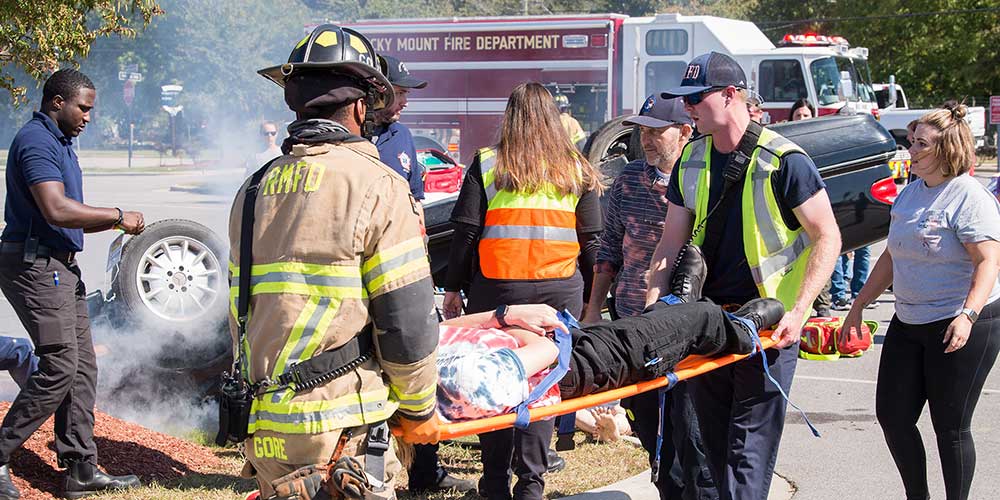 Students were faced with multiple injuries and other emergency scenarios in the simulated hospital on the second floor of the Lamm Building and in the parking lot of the Rocky Mount Event Center.

Adam Culbertson, fire and EMS coordinator at ECC and organizer of the event for the college, said the primary goal was to “to simulate a Mass Casualty Incident for the health sciences students as well simulation of a high patient load in a short amount of time.”

According to Nacole Everette, dean of the Division of Health Sciences at ECC, “This event was a voluntary activity for our students. Participation was not required, and we still had 31 nursing students, seven paramedic students, and five radiography students who took part in the training. It was an awesome learning experience for them.”

Similar training is conducted annually for paramedic students, but the MCI simulation event marked the first time that other ECC health sciences programs have participated.

The morning training began at 8 a.m. with individuals who were acting as patients transported to the simulated hospital environment in the Lamm Building, which includes an emergency room, imaging lab, examination rooms, phlebotomy lab, nursing skills lab, nursing assistant lab, debriefing rooms, and a nurses’ station.

Anjanae Counts, an associate degree nursing student, said she learned “how to triage patients by determining which were the most critical. I also learned the language of EMS, which will be helpful in the future.”

The main event began at 1 p.m. in the parking lot of the Rocky Mount Event Center. In the scenario, a car had plowed into a crowd of people attending an outdoor concert. Multiple injuries were reported, including several victims pinned under the car, which had overturned and was on fire.

ECC paramedic student Trakima Casom, who has been working as an EMT for three years, said the realistic drill “helped to prepare us for a real event, which of course we hope never happens.” She added that working with other agencies through the training will strengthen their response in a real emergency situation.

Edgecombe EMS Captain Dalton Barrett agreed. “Working as part of a group effort, that’s the main benefit for all of us.”

Culbertson said he is pleased with the outcome of the training event and is already planning the next simulation. “All of our health sciences students performed exceptionally well with communication between departments and each other. They also did very well in managing patient priorities.”