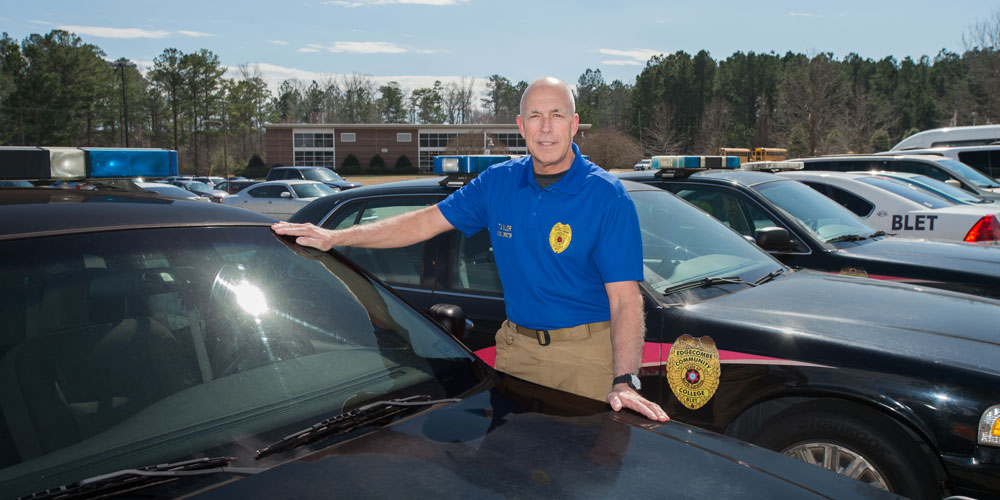 During Bernie Taylor’s 30-year law enforcement career in Eastern North Carolina, he endured countless tragedies: seeing the aftermath of horrific traffic accidents, consoling the families who lost loved ones to murder, and witnessing the despair of domestic violence.

In 2015, he turned in his badge in exchange for a clipboard and took over Edgecombe Community College’s law enforcement training program. He’d never been more anxious.

“I had more stress in that first year at the college than I had in my entire career in law enforcement,” Taylor, 57, says. “It was the most stressful time of my life.”

Taylor says he was worried about how his first Basic Law Enforcement Training academy would go, whether he could recruit enough cadets, and “just every little aspect of the job.”

“Once I knew we had enough cadets to begin that first class, it went well,” he says.

Juggling responsibilities is characteristic of his family. Both of his parents worked – his father in retail, mostly in the shoe business, and his mother in customer service, mostly at banks. “They always worked, so I figured that’s what I would do,” Taylor says.

He started with an after-school job as a custodian at Tarrytown Mall. Then there was a couple of years after high school working morning shifts at McDonald’s and evening shifts at Mr. Dunderbak’s in the mall.

After delivering sandwiches to Rocky Mount-Wilson Airport, he landed a job at Air Care, fueling and preparing planes for flight. But the memories of watching Adam-12 and Emergency! on television as a youngster and interacting with relatives on the force pulled him in another direction. “I was always intrigued by law enforcement,” he explains.

In 1986, he joined the Rocky Mount Police Department. “I immediately loved it. I enjoy helping people, which was our objective every day, and the comradery among officers is special and unique. It’s like a family.”

Six years later, Taylor left the police department to join the Edgecombe County Sheriff’s Office. Over the years, he worked as a patrol deputy, drug task force agent, and detective, rising in rank from deputy to lieutenant.

Before he retired in 2014, he was in charge of the training and standards for the sheriff’s office. “That’s what caught the eye of the college,” Taylor says. “When I retired from the sheriff’s office, it was like I walked out of one place and into another to do the same job.”

Though he’s removed from the front lines of law enforcement, he still deals with tragedy. One of his former cadets, Deputy David Manning, was killed in an on-duty traffic crash in 2018.

“I’ve had some close calls of my own, but nothing prepares you for losing someone,” Taylor says. “Here I am, a few years into this new job, and I’m attending the funeral of one of my cadets. It still haunts me.”

Now there’s a new set of cadets – fresh faces in the field of law enforcement. “It may surprise some, but I rarely teach,” he explains. “I teach about 20 hours of the 768 hours of training. I work with 38 instructors, all of whom have different skill sets and experiences to share with our cadets.” Taylor says most of his time is spent directing the academy, planning for the next academy, and coordinating law enforcement training.

Police work is stressful, dangerous, and unpredictable, and Taylor encourages cadets to take time to destress. He and his wife, Melissa, escape to the coast at every opportunity “to relax and let the Vitamin D take care of us,” he says. He has good friends outside of law enforcement, who also help him maintain a healthy work/life balance.

Despite the challenges, after nearly 40 years, Taylor still loves it. “Helping to mold the future of law enforcement, that’s what motivates me. I want to do everything I can to help develop officers who understand the demands of law enforcement and are well prepared to meet them.”