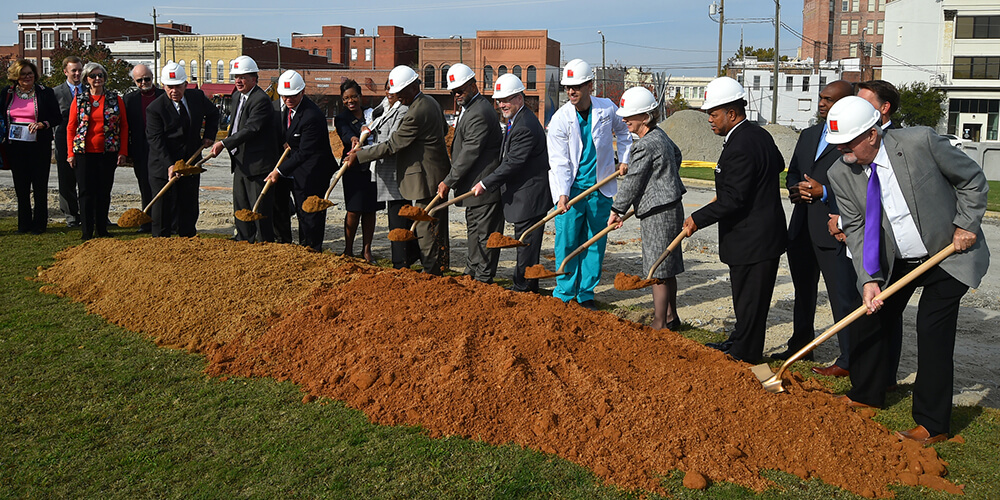 Officials from federal and state government, Edgecombe County, the City of Rocky Mount, and Edgecombe Community College gathered on the college’s Rocky Mount campus this morning for the official start of construction of the college’s new Biotechnology and Medical Simulation Center.

About 100 gathered for the groundbreaking ceremony. Guests were able to envision the footprint of the 45,000-square-foot facility, as Barnhill Contracting Company has already begun site preparation.

Wick Baker, chair of the Edgecombe Community College Board of Trustees, welcomed the crowd. “Next fall, when this high tech facility opens, a new era in health care education will begin in Edgecombe County and eastern North Carolina,” he said.

“This construction will usher in the latest model for health care education, which is realistic training through the use of patient simulators. As president of Vidant Edgecombe Hospital in Tarboro, I can personally attest to the excitement and anticipation we all share.”

The cornerstone of the new facility is a simulated hospital environment. Rooms will be set up to function like emergency rooms, operating rooms, ICUs, operating rooms, nurses stations, and the back of an ambulance. The building will house 14 of the college’s 22 health sciences programs. Planning for several new programs is under way.

Rocky Mount Mayor David Combs said the new facility “will continue to help us reach our vision for revitalization in downtown Rocky Mount.”

The Golden LEAF Foundation contributed $1.5 million to the project. Construction costs are estimated at $9.8 million.

Lorenzo Carmon, Edgecombe County manager, said the Biotechnology and Medical Simulation Center will “transform our community and have a positive economic impact on Edgecombe County.”

In her concluding remarks, ECC President Dr. Deborah Lamm expressed her appreciation. “Thanks to the support of all of you, the college will be able to expand and prepare the next generation of health care workers in this state-of-the-art facility, equipped with the latest technology. Thank you for making this project a reality.”